I was a Girl Scout for many many years as a young girl.
And then I was scout leader as
my girls were growing up.
That's a lot girl scout activities,
songs, badges, field trips, and of course, cookies. 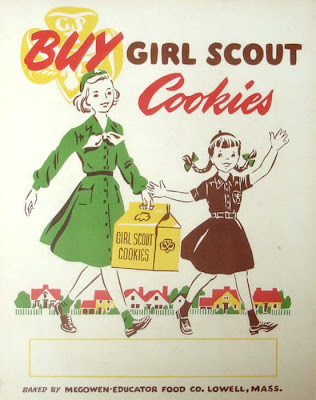 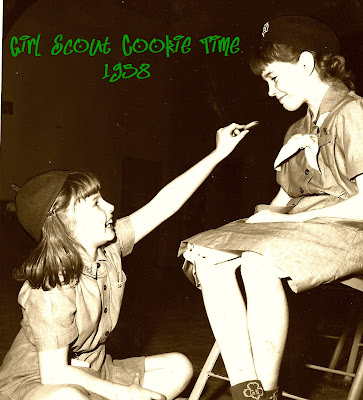 This picture was in my local paper probably about 1958.
It's me as a Brownie with another junior scout publicizing the fact
that it was Girl Scout cookie time.
Well I don't organize cookie sales any more,
but I do buy a few boxes each year.
Everyone has their favorites,
with thin mints being the most favorite
followed by the Samosa, which are my personal favorites.
Now that I'm in Denver during the week
and I don't have my Stashbuster's club as my cupcake distribution center,
I am using both my daughter's lab and son-in-law's lab as the recipients of my baking.
So in honor of the fact that the scouts in my area are taking cookie orders,
my Daughter and I made Samoa cupcakes.
Sorry Stashbuster friends. 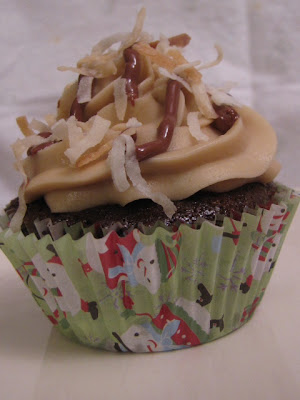 This cupcake has all the wonderful components of Somoas,
milk chocolate, rich smooth caramel,
and toasted coconut. Delicious and yummy. 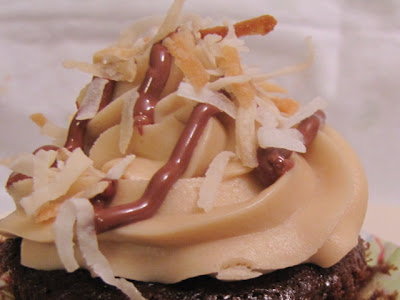 If you're looking for the recipe check out Sweet Pea's Kitchen.
I'll be anxious what response I get from my cupcakes.
Should I get ready to take orders?
Maybe I'd better just keep with my current job
with frosting on the side. 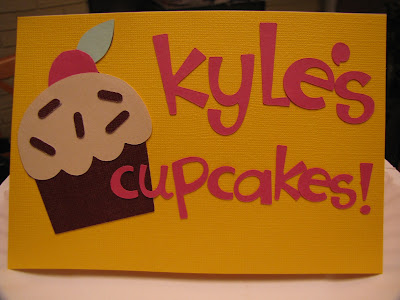 Just an update on the cupcakes:
24 cupcakes gone in 15 minutes
I'd say they were well received.
Until Next Time- 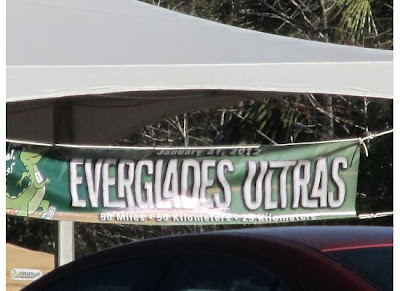 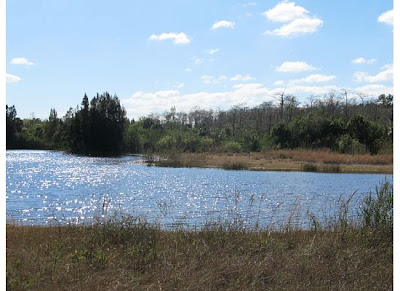 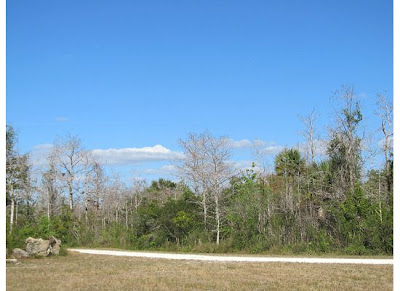 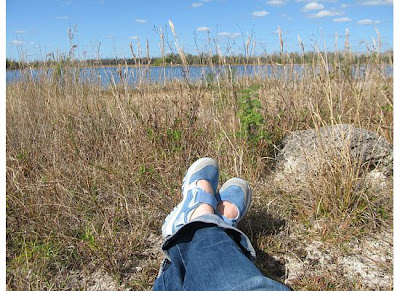 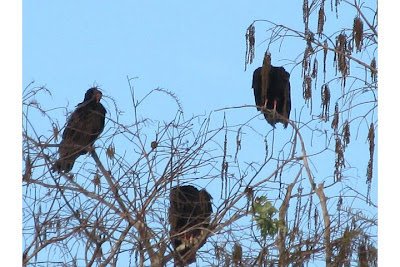 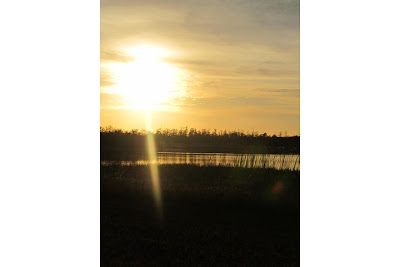 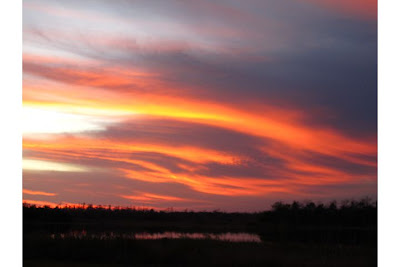 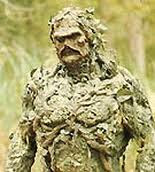 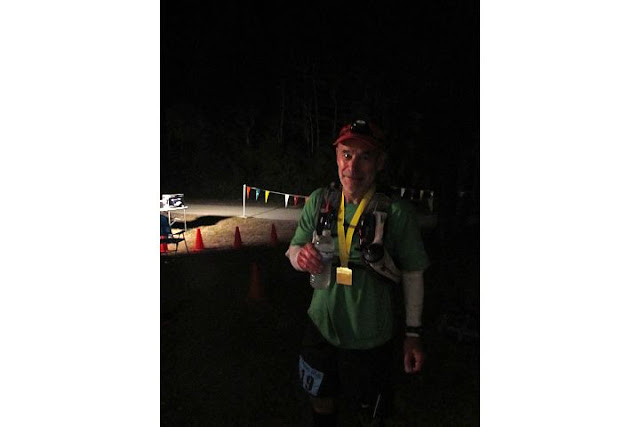 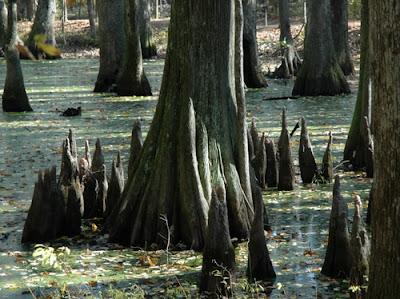 It's been a very interesting 2 weeks.
A new job can be exciting, challenging, tiring,
and can keep you on your toes.
Hey,
I feel like I've had this job before. 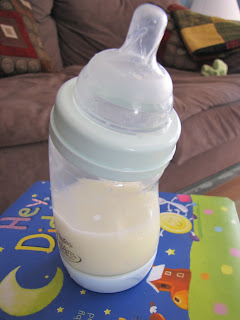 Granted it was 27 years ago, but it feels like it
was only yesterday. 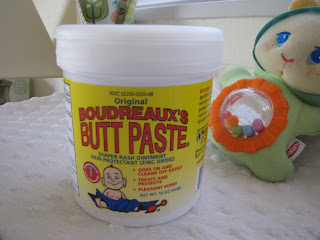 But now instead, I get to be the
Nana.
But I'm still trying to balance my obligations and
my desire to quilt.
I had forgotten how broken up my day was
going to be.
My little guy is not a good napper, but I have
stayed connected with this. 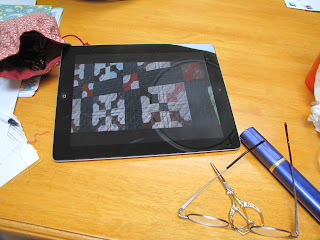 My I pad, obviously something
that didn't exist way back when I did this job before.
It's helped me talk to friends, listen to music,
and watch all kinds of programs.
Have you watched the first episode of
Why Quilts Matter?
Check it out if you're a member of The Quilt Show.
My music genre has been changed to
toddler radio, the Itsey Bitsey Spider,
the ants go marching, and the wheels on the bus! 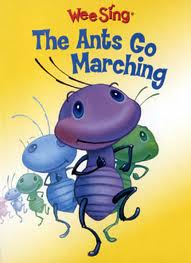 It's funny how the words are still embedded in the
wrinkles of my brain.
When I did this job a long time ago,
I was very strict about using nap time as quilting time.
So far I've found hand work has been my quilting outlet.
Bindings has been my start and stop
kind of project.
It feel good to grab that needle during the day.
It's my Ahhhh moment. 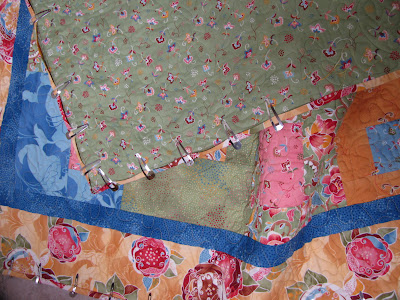 So I have been sewing,
learning how to use my I pad,
but mostly giving baby kisses to those sweet baby cheeks.
Until Next Time-

The Roseville Album Quilt continues
to be my go to project in the evenings.
I haven't gotten to far overall, but
I continue to stitch away bit by bit.

If you haven't seen the whole quilt here it is. 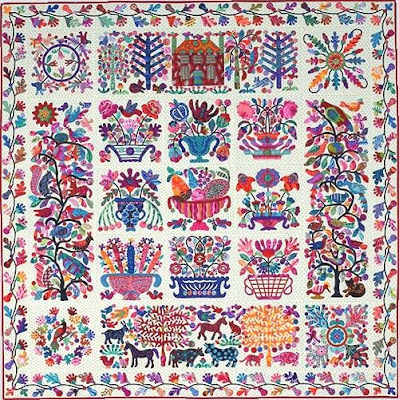 It is a pattern designed by Kim McLean of Australia.

Here are the last two blocks that I had worked on. 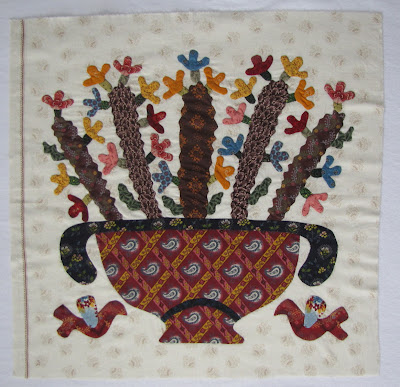 All the wiggly bumps along the stem were a challenge as
well as the tiny little flowers.
What am I say?
Each of these blocks is a challenge. 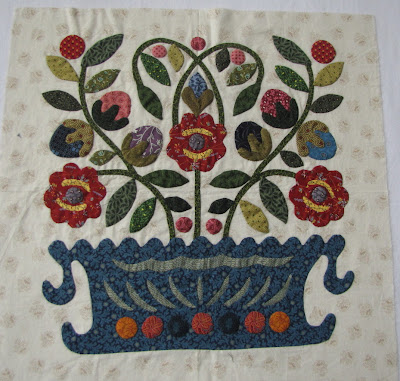 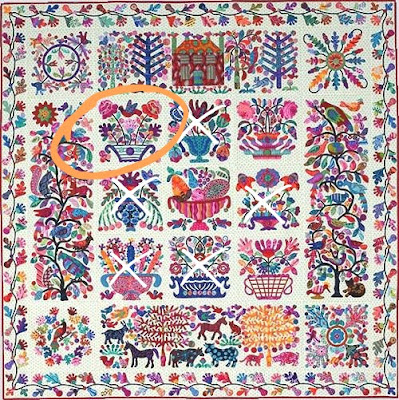 The circled block is the next one I've got cut out.
Here are the pieces laid out on the pattern sheet. 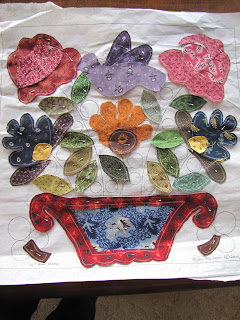 Unless you pin all those pieces down there's no way
you could keep track.
It gives me a good visual on how
the colors are working together and
if the block looks balanced. 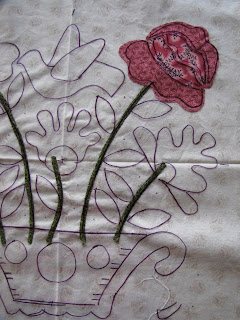 I use a plastic overlay of the pattern for
placement of the applique pieces.
That way I don't mark of the background. 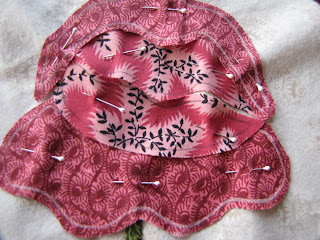 I love those tiny applique pins by Clover.
They're so tiny and better than sequin pins
because the heads are smooth and
prevent the thread from catching and pulling
so that you're not continually
unthreading the needle.
( which can be totally frustrating!)
Now it's down to business.
There is really something peaceful
about sitting and appliqueing even
if the pieces are small, very curvy and
there's a bazillion of them.
Until Next Time-

Get Out Your Swamp Running Shoes

Panthers,
Gators, and
Bears, Oh, My!

If those wouldn't make you run fast,
throw in a few snakes as well.
The running man is heading off
in a new directions this weekend.
South...
to the Everglades.

He's going to running in the first

I think this will an a very interesting? experience.
Especially when I read on line this informative
paragraph.
What do you think?

Whistle or Air Horn
Each competitor will be given a whistle or small air horn or similar device that must be carried at all times.  If an animal is encountered that does not move out of the way, sound the device.  It may motivate the animal to move.  If not, continue to blow the whistle or use the horn in short bursts.  This signal will be considered a call for help, no matter the purpose. Race marshals on the course will respond to the signal when they hear it.  (Further details to be provided at the pre-race orientation meetings.)

Kate will be with him as kind of a crew.
They won't let other people out on the course.
So I'll get a description from her as to what it really was like. 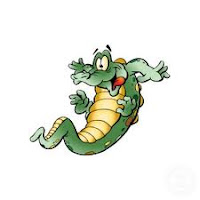 There's a running man coming through.
Until Next Time-