July has been a hot, busy month
and it was nice to work
on a small quilt to
commemorate the  signing of
Declaration of Independence
of the United States, July 4, 1776. 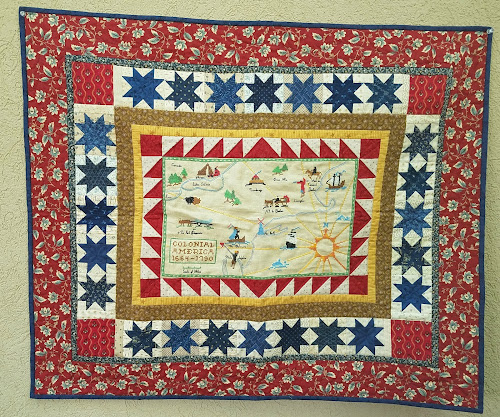 "Give Me Liberty"
30" x 36"
This July mini started out as
vintage x-stitch piece picked up by a
friend at a
"jaunting for junk" sale in Nebraska
a couple of years ago. 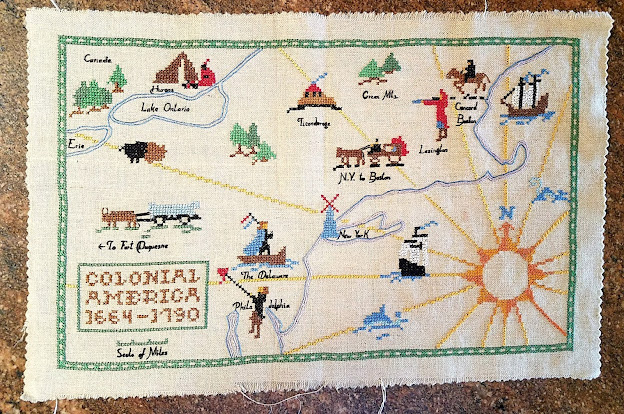 I'm thinking it was a piece completed
during the bicentennial, July, 1976. 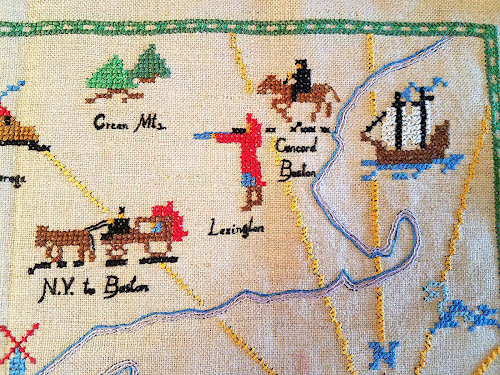 I'm sure many of us did something similar.
My friend, Liz, thought I would like to
create something with it because of my
family patriots who served during the Revolutionary War.
She was right.
It took a few months to come up with a plan
and then to do the math to make the pieces fit.
But it didn't take long for my head to hurt because
the numbers were not good quilt making numbers.
I decided to go ahead and make hst's and see
what happened.  The surprise was that by some
miracle it worked out.  It sure didn't on paper. 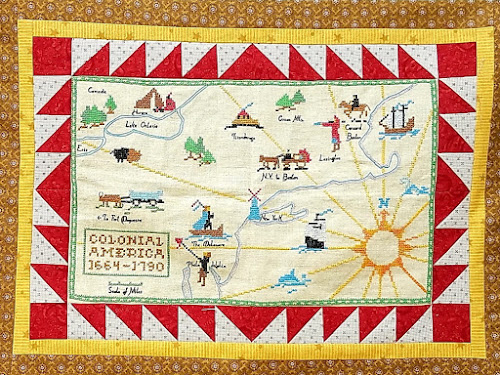 The next pieced border needed
a couple of coping strips to make
it fit.
In this case, the measurements looked good on paper,
but when it came to adding the
3" sawtooth star borders they was too short.
Adding some narrow background pieces on both ends
solved the problem.
Who wouldn't  know that I didn't plan
it that way.
So much for paper and pencil! 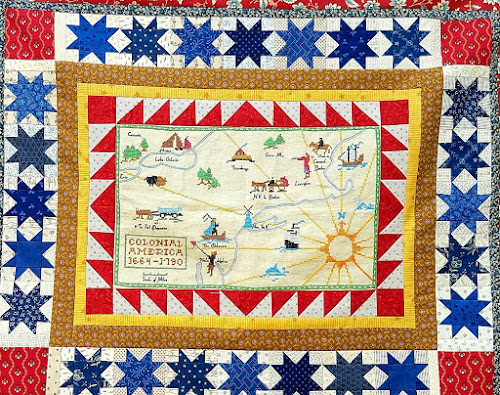 I had to look far and wide for
an outer border that wasn't too plain
or too busy.
I finally found
an older French General print that
was the perfect one.
I pulled all the colors that were
in the original stitchery
and use them to create the quilt. 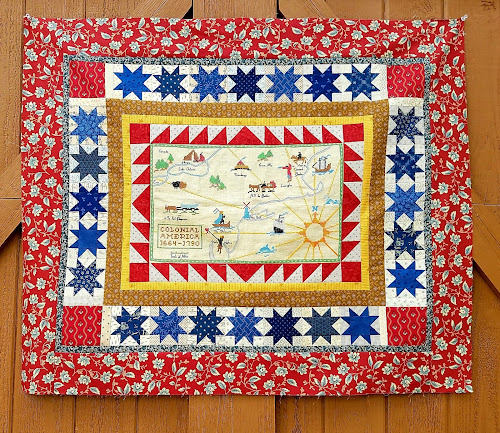 Along with another French General piece and a very old
Barbarar Brackman civil war fabric,
complete with cannons and flags, 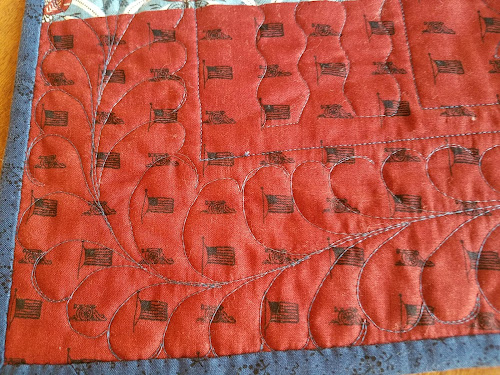 I put together a backing. 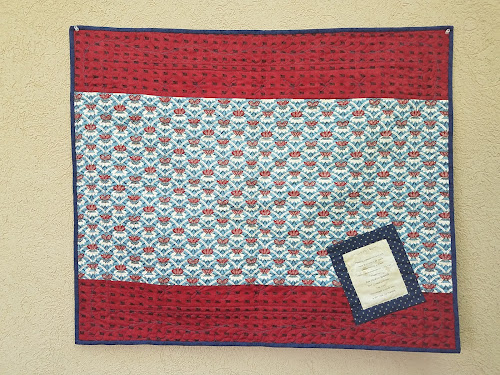 Most of the quilting was simple
but the outer borders called for something more elegant,
like feathers.
I really enjoy quilting
organic freestyle feathers. 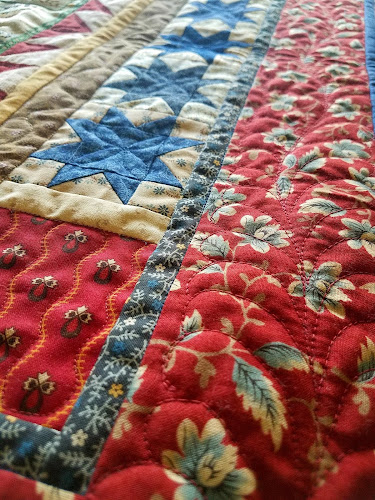 It gave the quilt the finishing touch.
It's a sweet quilt to be included in
my July collection of
red, white and blue and is
a special way to remember
that so many have given their best just for me.
Be sure to check out the links of other fabulous
monthly minis
on Wendy's blog, The Constant Quilter.
Until Next Time-
Kyle
Posted by Kyle at 6:00 AM 22 comments:

Hand Stitching through the Heat

The hot summer weather that
we've been experiencing
has left me feeling drained
and lethargic. 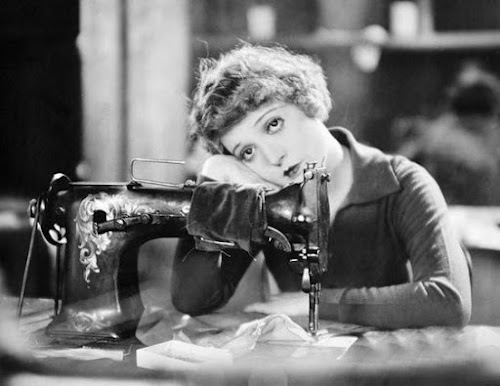 Maybe it's a combination
of the heat,
the continuing quarantine,
isolation,
and boredom.
I suppose the list could go on,
but I've tried not to dwell on
too much of the negative.
But still,
it does eventually catch up with you.
Running Man and I spent a couple
of days camping 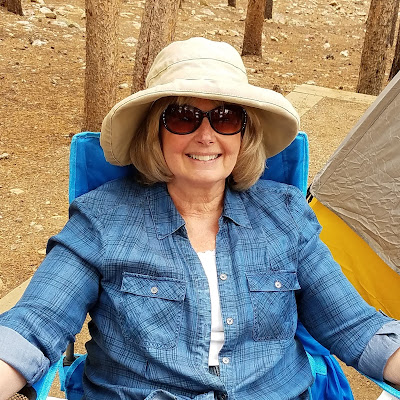 with our daughter's family.
The 3 grand kids kept us very entertained, 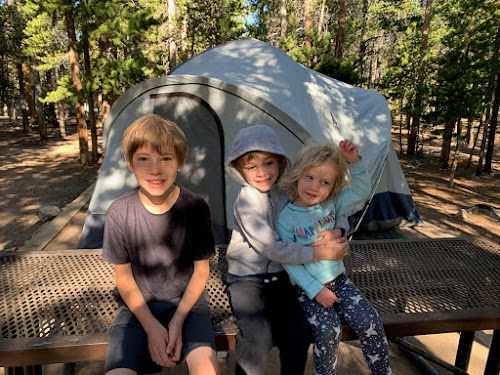 but then that wisp of normalcy was gone.
I have used the past week
to focus on enjoying hand stitching
a variety of projects.
Stacey West at Buttermilk Basin had a
free sew along a while ago called 'Stars and Stripes'. 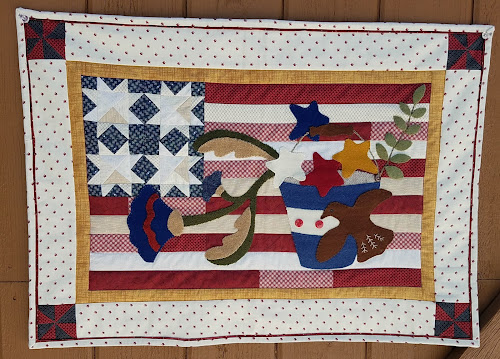 I decided to order the kit that included the wool
pattern and fabrics because
I wanted to support her business and thank her
for sharing so much of her
talent online for free.
I found
whip stitching around wool,
even with the heat,
was totally relaxing and
mind soothing. 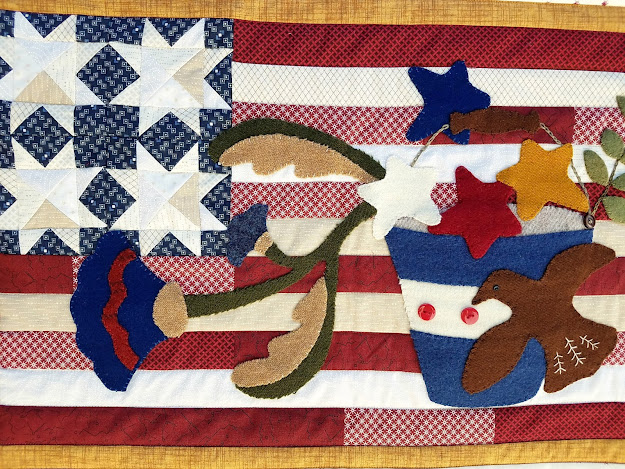 I usually have to change a few things
that comes with the kit,
but that's a quilter's choice.
I did use my machine to add the flange binding
Love the quickness of that! 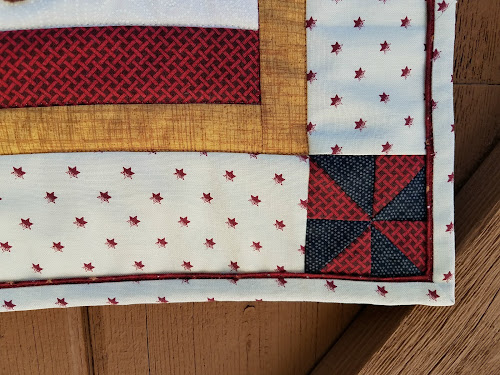 Thanks again, Stacey, for
your talent and willingness to share
with so many.
****
I've also taken the time to
make another block for Stars Upon Stars. 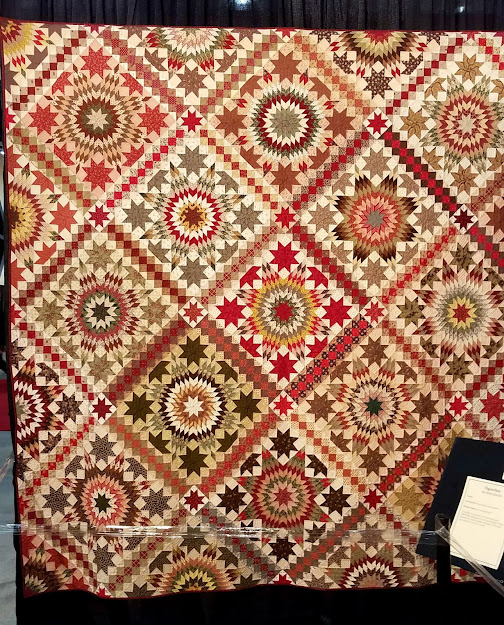 "Ogeechee"
made by Aline Loulin
Houston, 2018
Once the block is sewn together it's
all fingers crossed
to see if all those
tiny diamonds will lay flat
or if the center point looks decent. 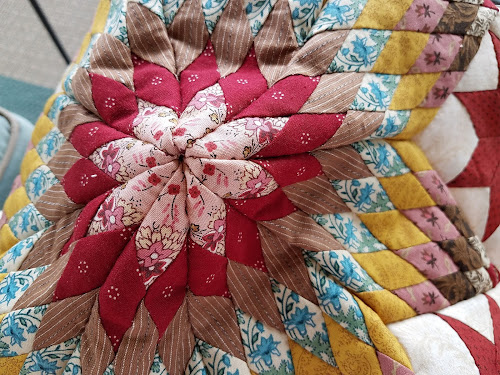 Will you have a volcano in the middle? 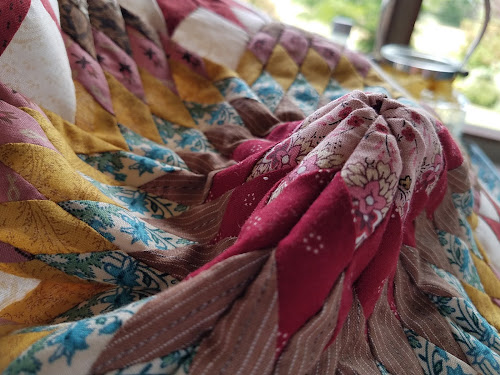 or a deep whirlpool? 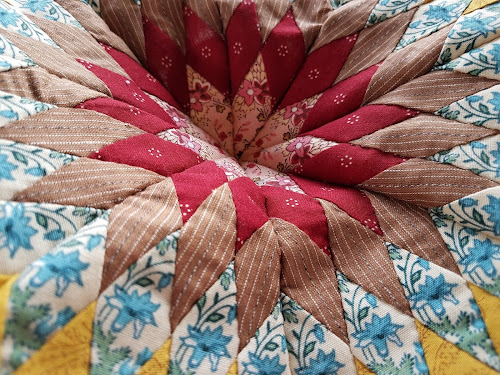 All of the blocks for this quilt
have been sewn by hand
and have been pressed carefully.
Whew! 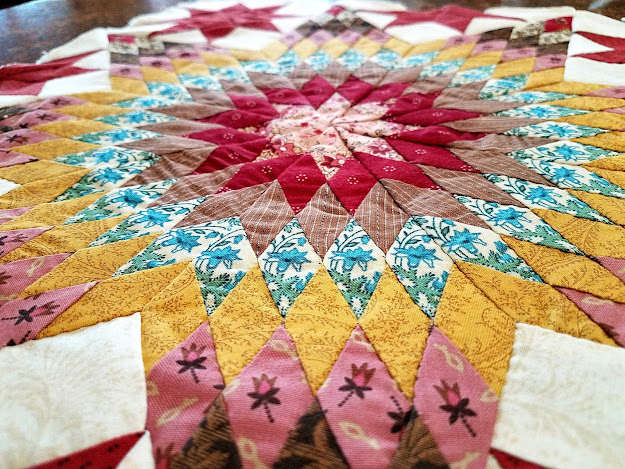 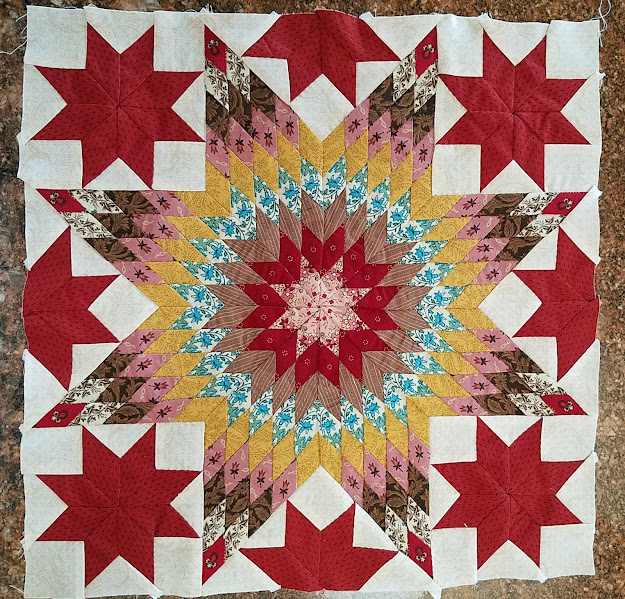 There's more hand stitching on the
agenda for this week.
The weather is still
unseasonably hot for this area.
Hopefully, I'll catch a
cool breeze 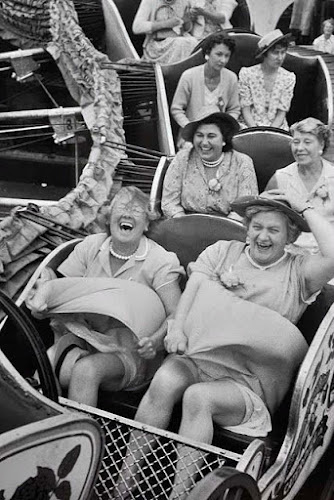 and keep stitching along.
Until Next Time-
Kyle
Posted by Kyle at 6:00 AM 22 comments:

What a busy month.
It seems to have
flown by.
Like many of you
I have attempted and continue
to complete several unfinished projects.
My June mini is an applique and
pieced pattern started in November,2019
as a QAL with Sharon Keightley. 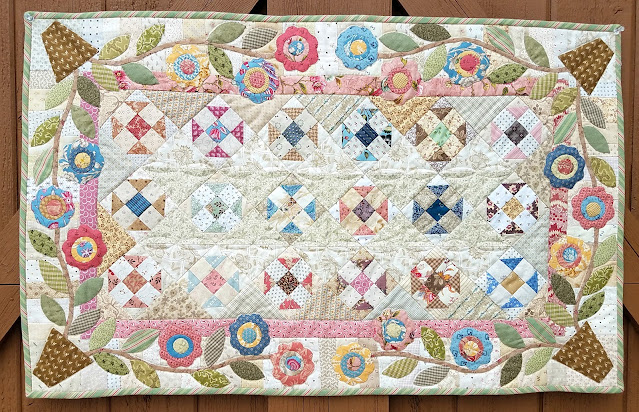 The Secret Garden
July, 2020
22"  x  34"
I was using the pattern from
Sharon's book
Autumn Bouquet.
It was a wonderful pattern to
use up little bits of leftover fabrics. 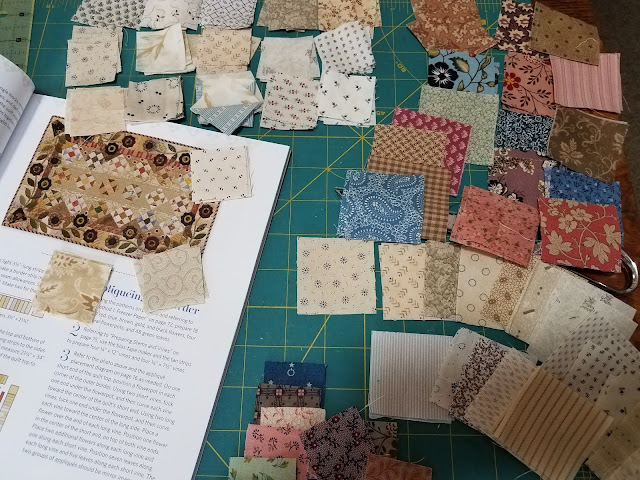 All those sweet scraps
were sewn into wonderful
shoofly blocks. 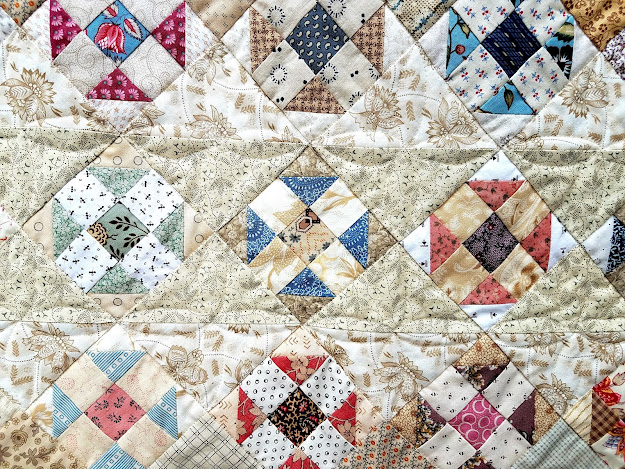 It also was a good project to
machine applique the leaves 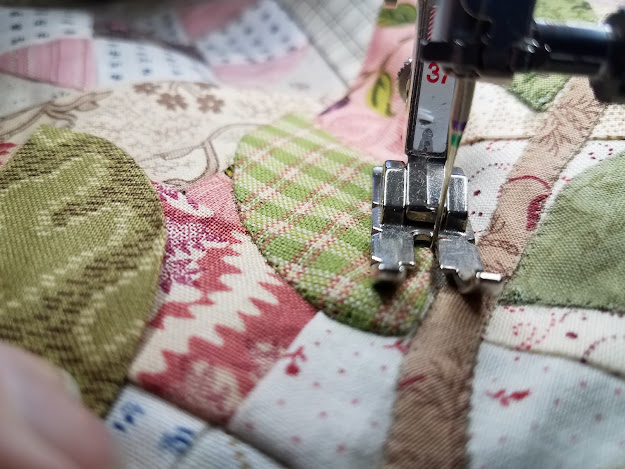 as well as, layers of circles
that created flowers. 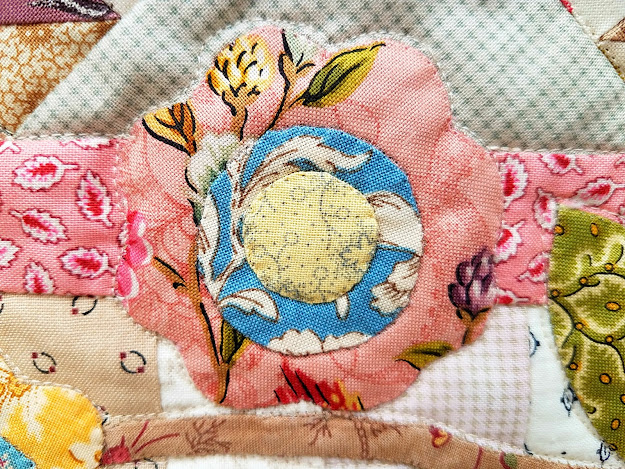 The stems and flowers
flowed gently out of the 4 corner vases
for the outer border. 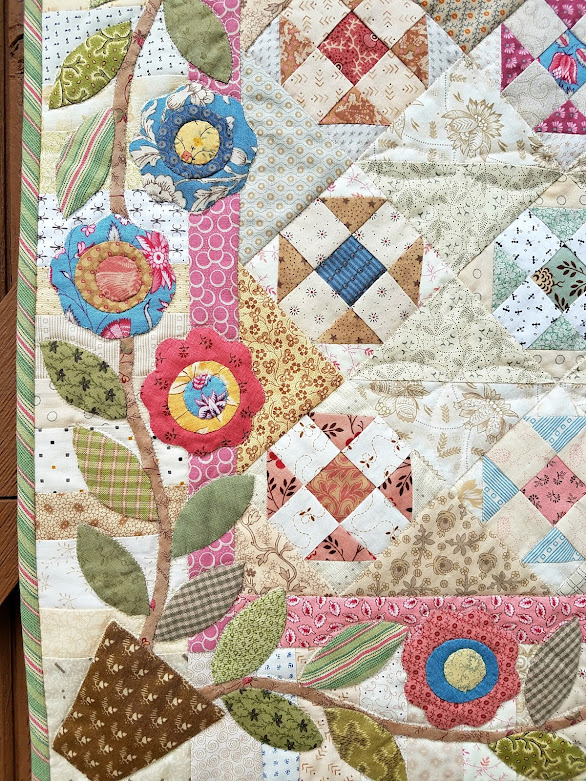 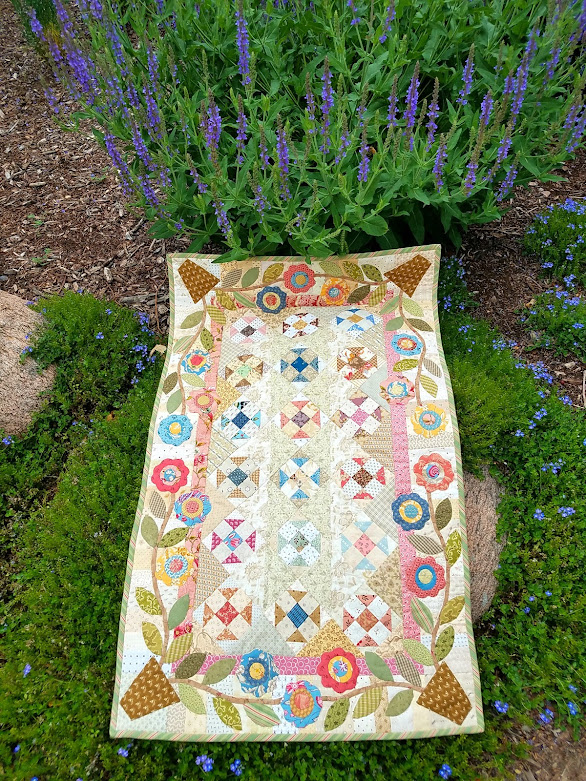 is a good backdrop
for this scrappy garden design.
As well as, the purple penstemon flowers
and sulfur yellow buckwheat 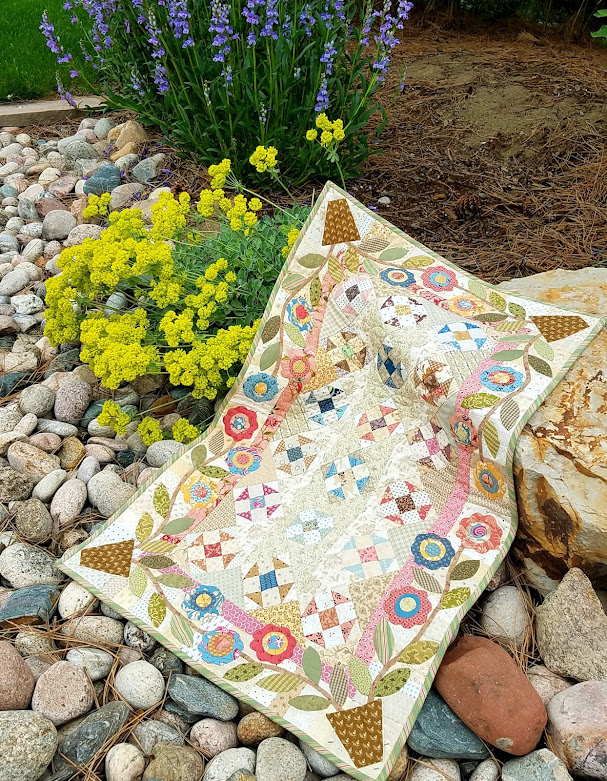 I actually had to run out and quickly take
these photos as it looked like
it was going to start hailing any second.
If that happened, the flowers would
be completely trampled and been
reduced to
a colorful flower mush.
It happens here a lot, but
fortunately, this time
it turned out just to be
rain, which we always need.
The month of June may have faded away,
but this little secret garden quilt
will be a reminder of one of
summer's happy month.
Need some wonderful inspiration?
Check out the Wendy's blog, The Constant Quilter,
for links to the other
Monthly Mini Makers.
You'll be glad you did!
Until Next Time-
Kyle
Posted by Kyle at 6:00 AM 30 comments: