For me, July means
red, white and blue and
over the years, that has meant many
patriotic minis.
This month I had two different ideas so,
while I had that color combo scattered
across the floor, I kept on sewing.
The first one is a return to a past love,
stripes and plaids.
My stash is still filled with these wonderful
fabrics that reflect that primitive homespun look. 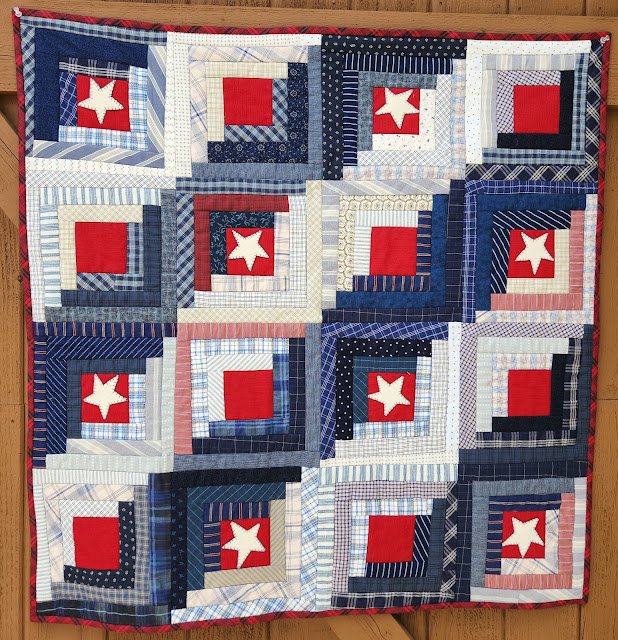 Fireworks and Pie
35" x 35"
I had always wanted to make a log cabin quilt using
a extra large center square. 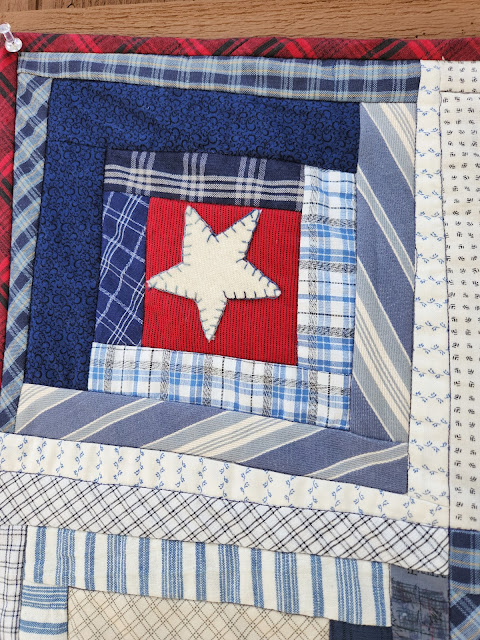 Starting with a bright red center and
using strips in roughly the same width and
then casually trimming the blocks, it was
fun to put these blocks together. 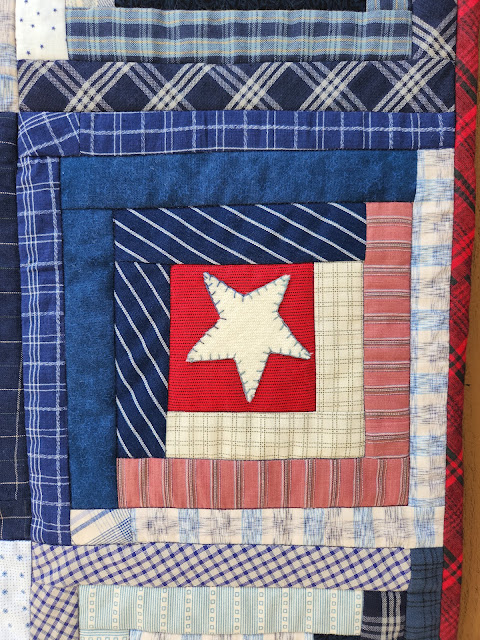 I cut many of the strips on the bias
to add movement and interest.
When I finished I thought the centers needed some
wool stars buttonholed with a variegated perel cotton thread. 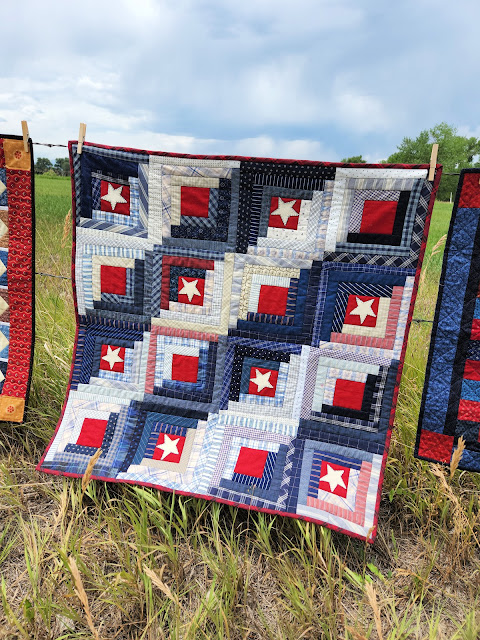 The second one took a different direction.
Still simple, but much darker. 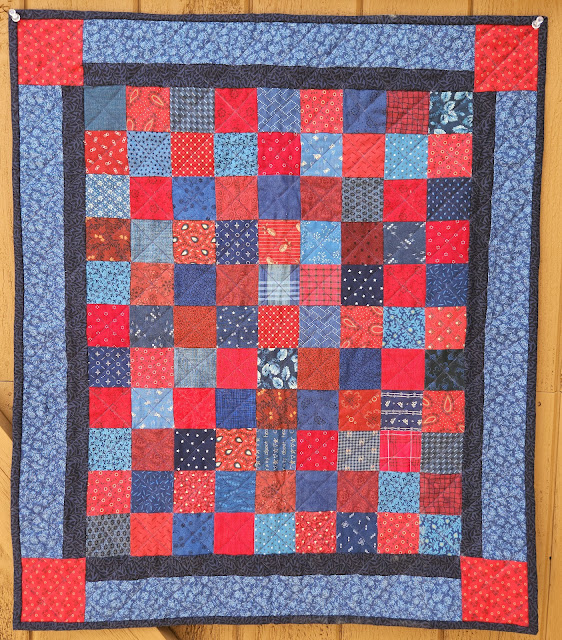 Patriots
24" x 28"
In honor of my family members who answered the Alarm
on April 19, 1775 and fought at the battle of Lexington and Concord.
I started piecing 2 1/2" blue and red squares together
as 4 patches.  Nothing could be much simpler.
My first thought was to finish with a dark blue border. 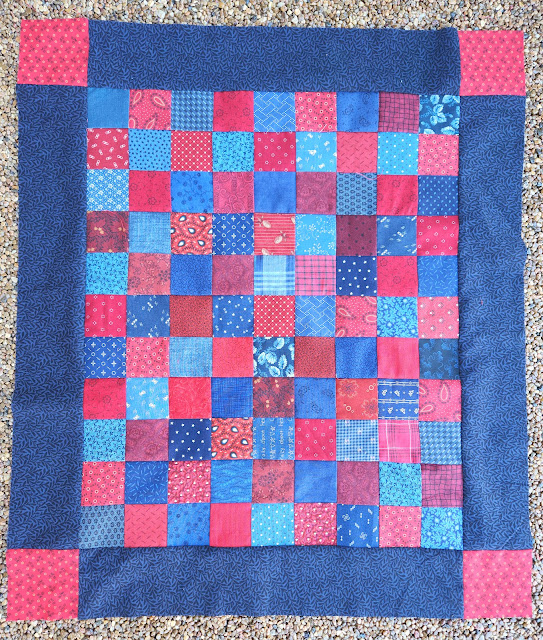 Looked pretty blah.
The blue is one that you might recognize.  It's a
very old Jenny Beyer's VIP fabric.
It may be old, but was the perfect shade of blue.
I decided to cut down that border
and add a lighter brighter blue. 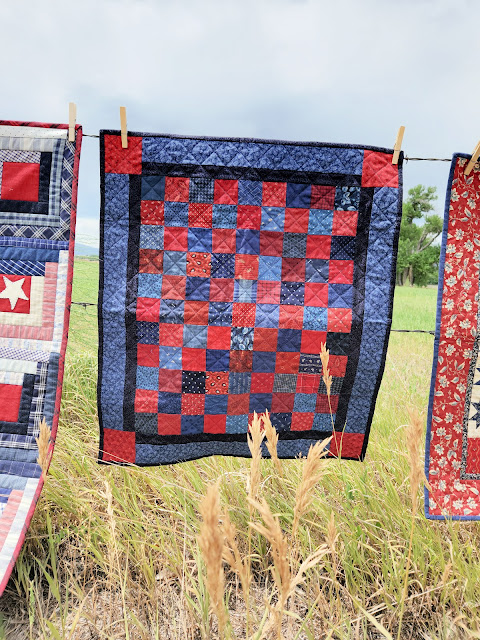 Small pieces of batting fused together can be
easily used in a mini quilt, as well as odd pieces
of leftover fabrics for the backings 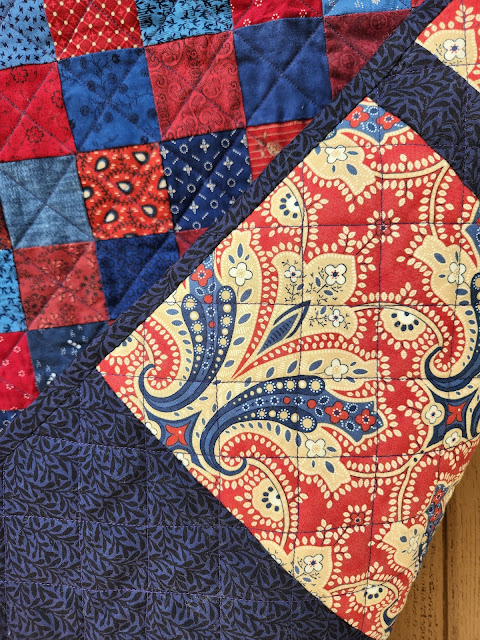 The barb wired fence display looked great with
these quilts. 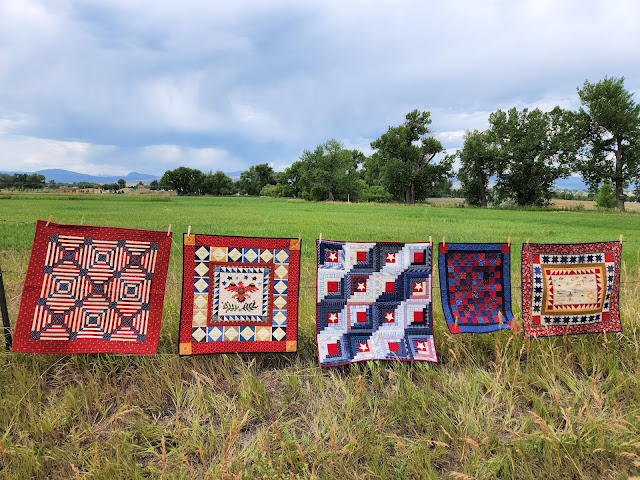 July Minis
Be sure to stop by Wendy's blog, The Constant Quilter,
for the list of other Mini Makers.
Until Next Time-
Kyle
Posted by Kyle at 6:00 AM 14 comments:

What? Another Do Over?

Recently, a dear quilting friend,
thought of me when she was doing
some purging.
She brought me a very loved and worn
quilt top that she had collected
somewhere, sometime, in her quilting career.
She thought if anyone would like to do
something with this, maybe Kyle,
would like to be challenged.
Oh, boy. 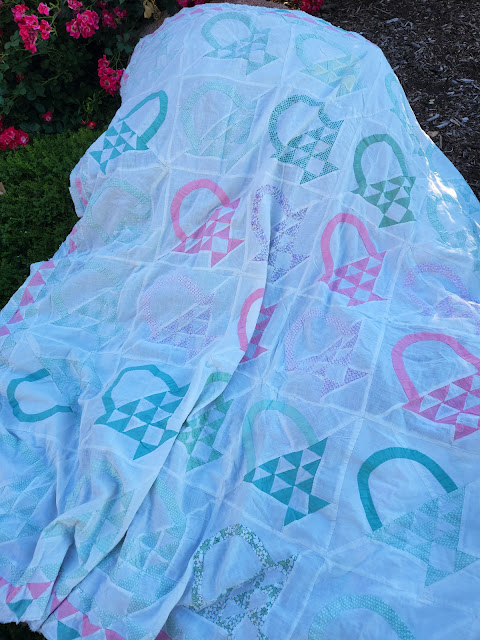 The vintage basket quilt
is hand stitched with 48  nine inch basket blocks
using a muslin background and 30's fabrics.
Most of the blocks are very faded
with lots of repeats of the same fabric.
Many solid green and pink pieces. 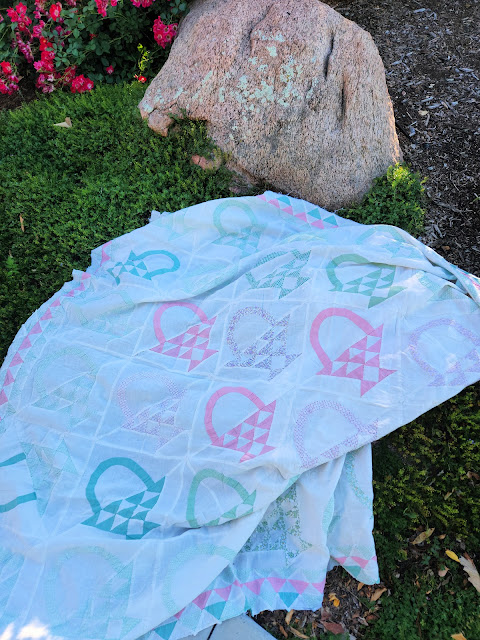 I forgot to take a picture of the pieced border
that was on three sides, but you can get a little peek of it
in the above photo.
The blocks were probably pieced in love,
and the blocks, of course, varied in size. 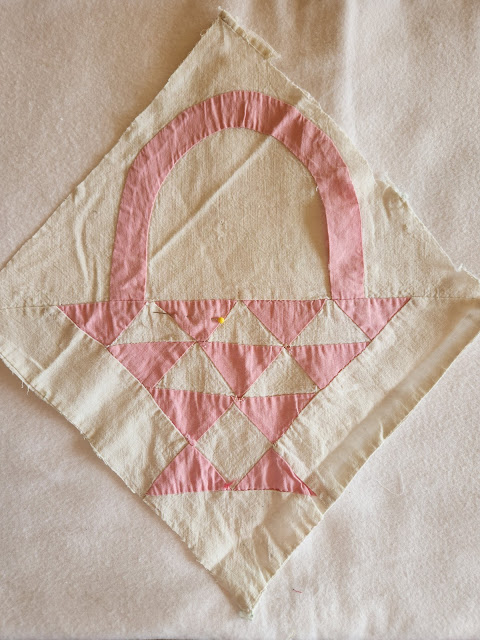 Many of the blocks are not worth saving, so
I have chosen the best of them to work with.
At this point, I'm slowly unstitching,
repressing and resizing the individual pieces.
Here we go again.
As I have been taking this quilt top apart
I noticed these holes.
They were not in an organized pattern,
but I figured out the top had probably been tied. 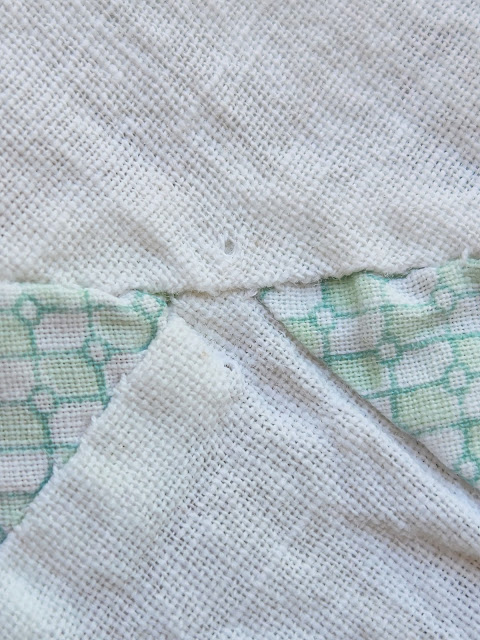 Sure enough, I found a few places where the yarn
was still there. 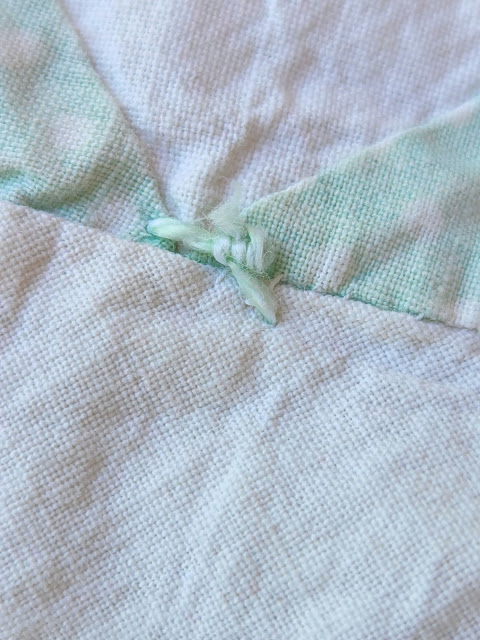 This made me wonder about the original
use of this quilt.
Because there were many yarn ties still in tack, what
were they originally tied to?
If the quilt top was removed from the backing, as in a summer
quilt with no batting, why were there still yarn ties
on the front?
I'm guessing, not all of the ties caught the backing fabric.
I also think that this probable summer quilt was washed many times.
Take a look at the seams. 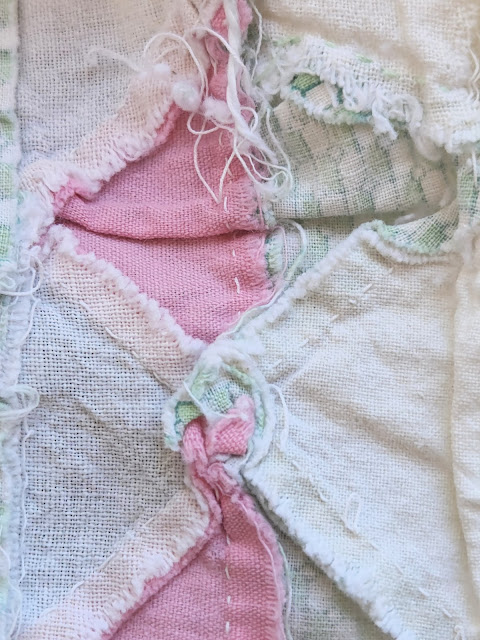 They're pretty messy, but not raveling which would
have definitely happened if the top was washed
after it was taken apart.
That big blob is a piece of a yarn tie.
To see if I could rework these blocks,
I practiced with one block.
I didn't want to handpiece these, so I machine stitched
the block, but hand appliqued  the handles. 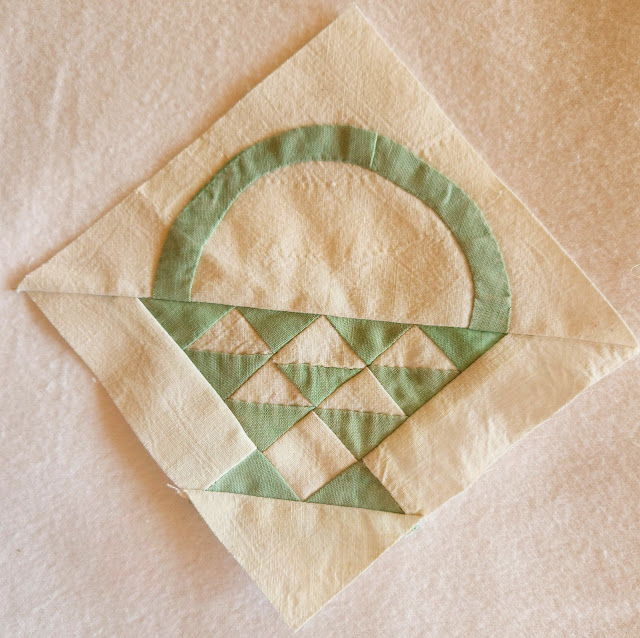 4.5" finished
This isn't going to be fast project, but
might speed up once I get the 14/15 blocks apart.
It's a good outdoor project as it
creates lots of loose threads.
I even got a couple friends to help me
when we met at the park.
Until Next Time-
Kyle
Posted by Kyle at 8:52 AM 18 comments: