Christmas is an exciting time when you are a kid.  Time seems to move in slow motion. The big day will never come.  I can remember writing letters to Santa describing exactly what I wanted him to bring me.  When  new catalogs came, I would dog ear certain pages just so everyone could keep track of what my hearts desires were. 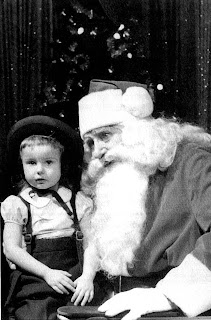 On at least one occasion I must have been able to tell Santa directly what was on my list.  Don't I look like I should be from the original movie," The Miracle on 34th Street" . 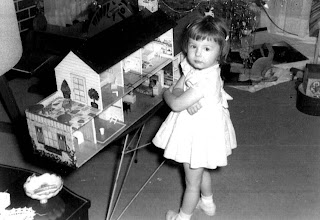 It was always such a mystery to me how Santa would always bring exactly what I wanted, plus so much more.  It was all so magical.  I played and played with that doll house.  I had it for a very long time.  Santa listened very well.

One of the best gifts I remember getting was the year, my sister and I got new bikes.  There really must be a Santa because those bikes just magically appeared under the tree Christmas morning.  Wow! 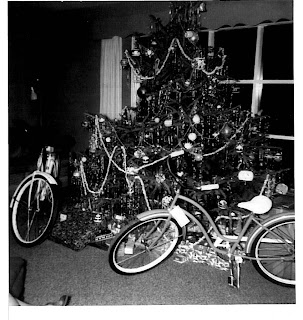 Mine was a pink and white Schwinn Spitfire and Jane's was a turquoise colored Schwinn .  We rode those bikes forever.  Sometimes they were rockets and sometimes they were horses.  Of course, my horse was named Spitfire. The bikes had multiple speeds,which was controlled by how fast or slow we petaled.  I can't imagine how Santa got those bike down the chimney and right into our living room.

One year we got these fun stuffed monkeys.  I think I still have mine in a box, stored away! 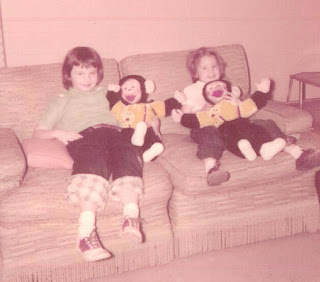 It's been a long time since I wrote a letter to Santa.  What would I ask for now?  I'm sure he knows my heart and my desires.  Guess what, He always comes through.

Until Next Time-Kyle
Posted by Kyle at 7:05 PM