A Glimpse Back and a Story

Because March is
National Quilting Month,
I thought I'd share one of my
quilts that has had
an interesting history
and story. 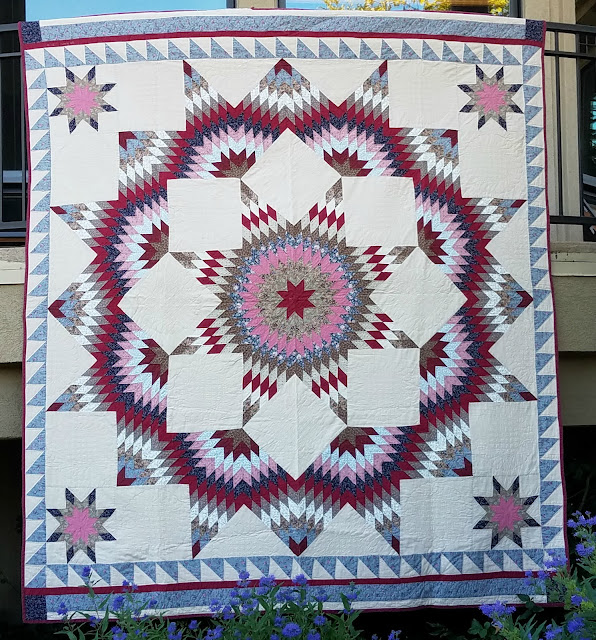 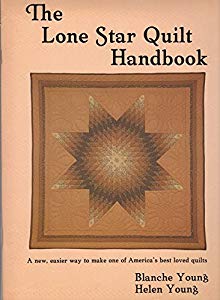 Their method was revolutionary.
It was strip piecing yet using a template
to accurately mark the points of intersection.

It was faster than sewing individual diamonds,
but seems slower than today
because of the inclusion of the markings, yet,
it was very precise.

I made several Lone Star quilts
using their method 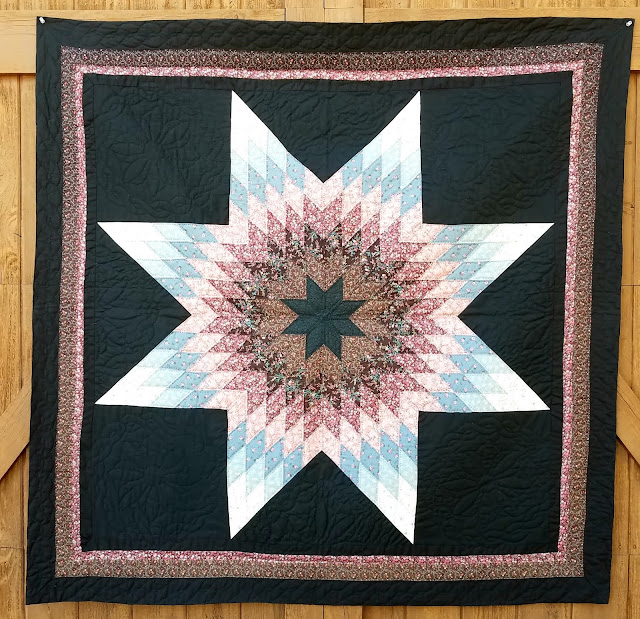 After making four lone star quilts
I decided it was time to make the ultimate...
the Broken Star.

You can tell by the colors and fabrics,
smaller calico prints,
how tends come and go. 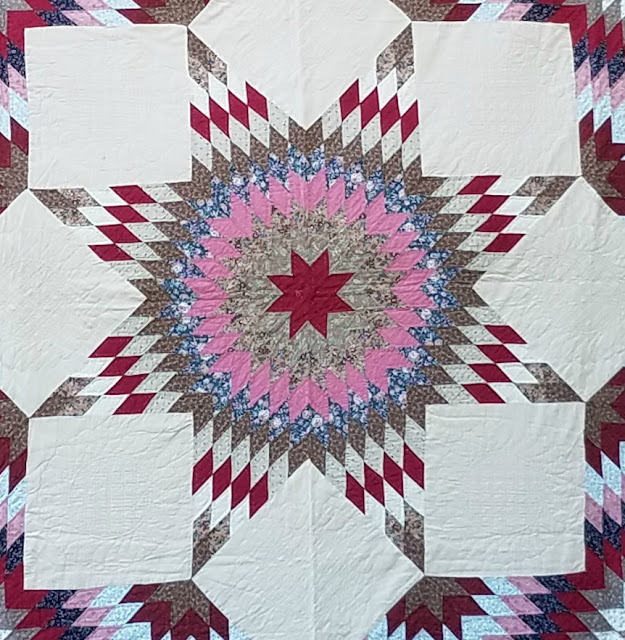 I wanted the quilt to have an antique look
so I decided to use a 100% cotton batting.
Big mistake.
It was miserable to hand quilt. 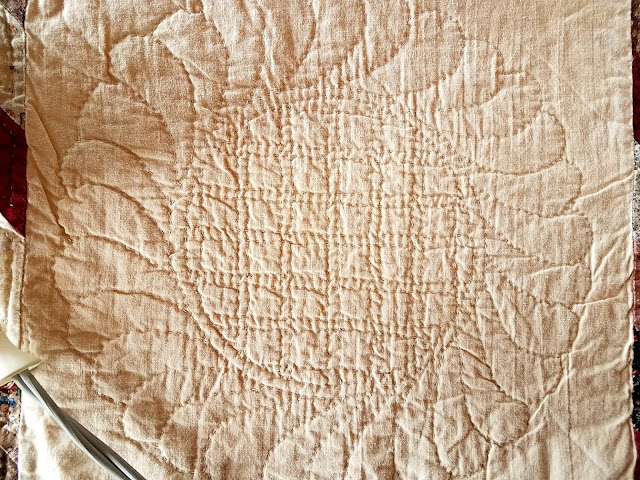 Finally, I began using a platinum coated needle
and then was able to get two stitches at a time! 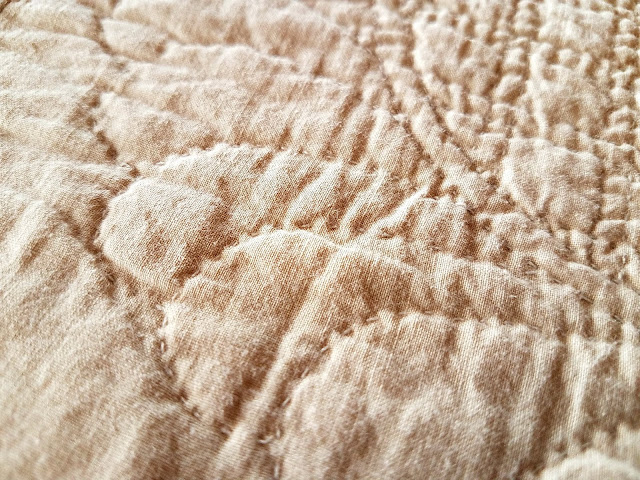 It was drudgery.
My stitches were pretty even,
but not too small.
It took me two years to finally finish it

That's why there isn't as much quilting
as I probably should have done or
what would have been done today.
***

Biannually, The Colorado Quilting Council
used to  have a spectacular quilt show
held in the Denver state capitol building. 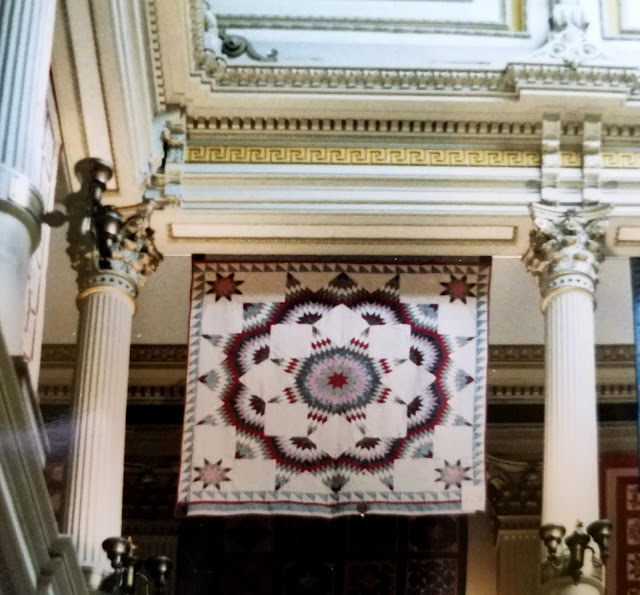 my quilt was displayed.

It was a few month later,
I received a letter from the Denver Art Museum
asking if I would be willing to have my quilt
be included in a quilt show they were putting
together to be sent to Japan called,
"American Patchwork Quilt Colorado."
I was over the moon!!

A book was published and 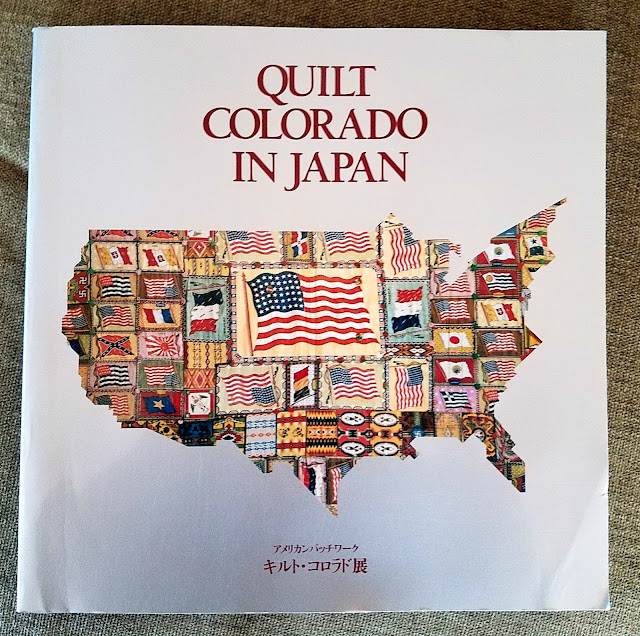 I was thrilled to see my quilt in print. 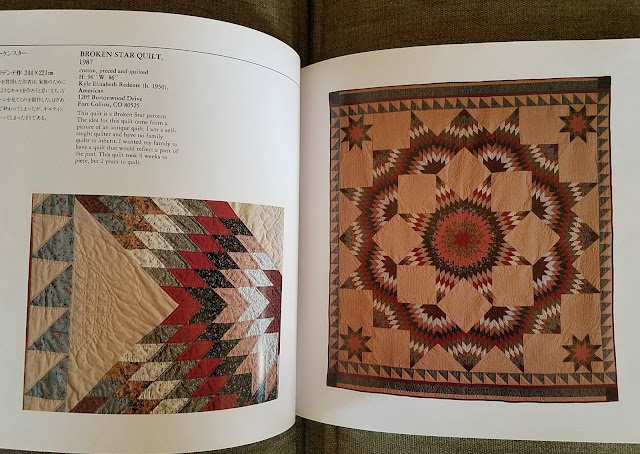 A bigger thrill came when I found out
my quilt had been used as the poster quilt for
advertising the show. 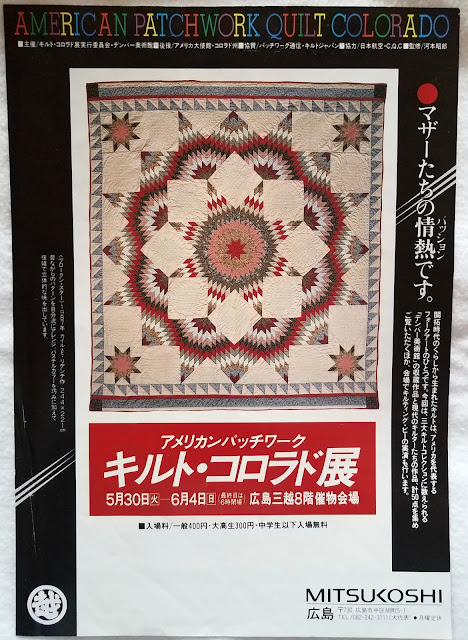 Later in 1990 it was shown at the AQS show
in Paducah, Ky 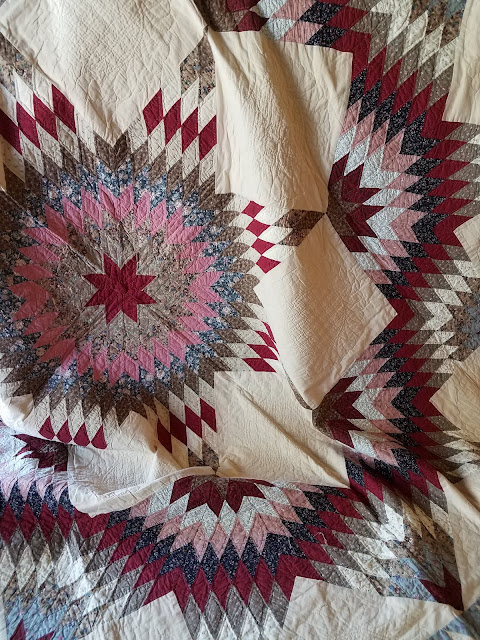 and also at Quilt America,
a show held on Kokomo, IN.
***

Well, that's where the joyful part of my story ends.
After receiving my quilt back,
I thought I would give it a quick and gently wash,
no soap, nothing added to the water.

When I opened the washer
I was horrified to see all of the
maroon/red fabrics had run!!!

What I didn't understand was why.
All the fabrics had  been prewashed
and I had washed the quilt when I had
finished it in 1987.

Back in the washer.  This was all
pre-Color Catcher days.
I ended up washing the quilt
about 5 times.  Each time trying something new,
a little spray and wash,  more spray and wash,
a little Biz, a lot of Biz...
You get the picture.

*I had a friend who worked for the water
dept. in Fort Collins and his thought was
that the chemical composition that particular
day was such that it reacted to the dyes of the fabrics
causing them to run.
I know no other explanation and
will use that as the reason.

The good news: most of the bleeding disappeared. 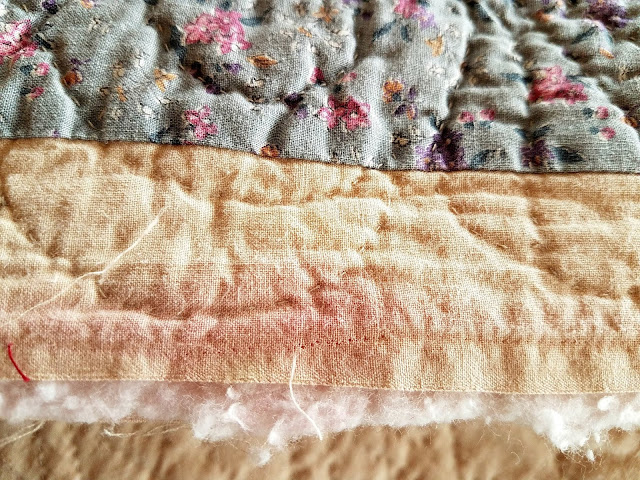 The bad news: the fabrics are terribly faded
and dulled.
They actually look petty beat up. 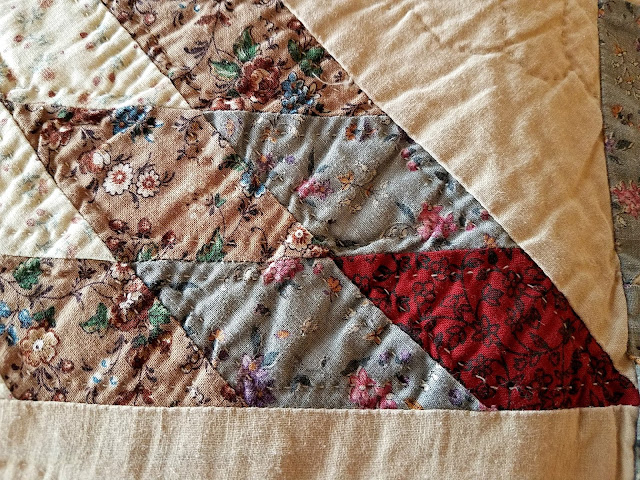 The original binding was destroyed.
I do remember
it was a Jeffrey Gutcheon fabric and I had loved
the slight texture it had. 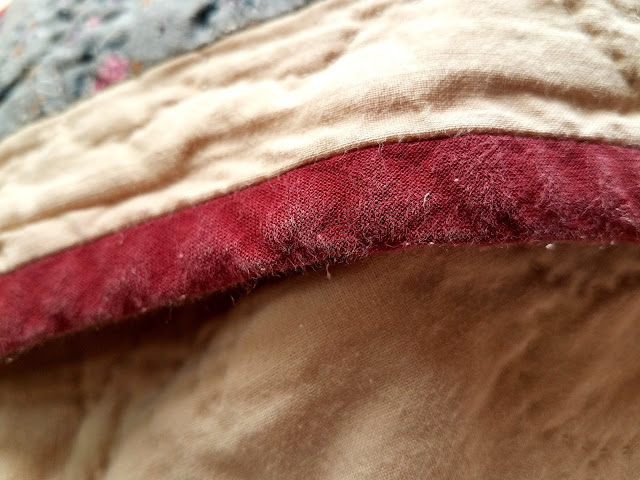 But look at it now.

My goal since then was to replace the binding
and enjoy the quilt.
But that binding still remains on the quilt. 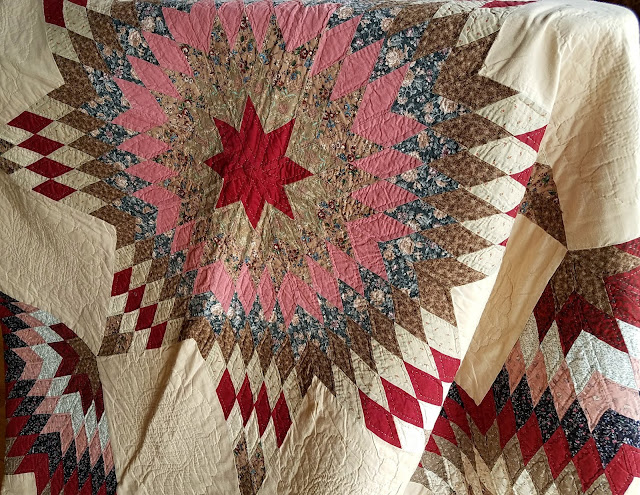 I still love this quilt very much
and it has definitely achieved the antique look I was going for!! 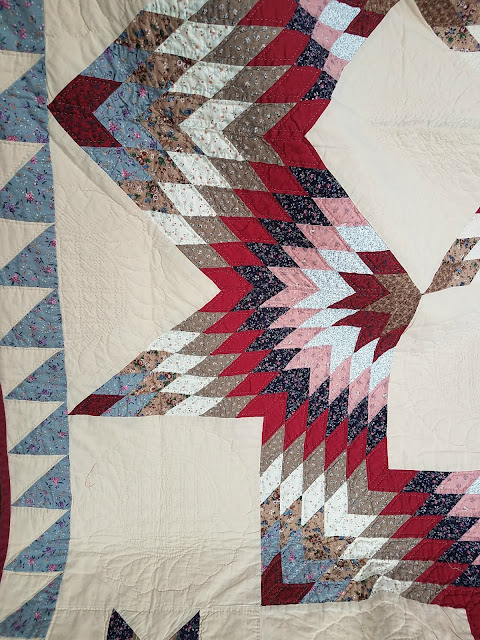 I've had it tucked away for almost 30 years.

Maybe it's time to
move on and replace the binding. 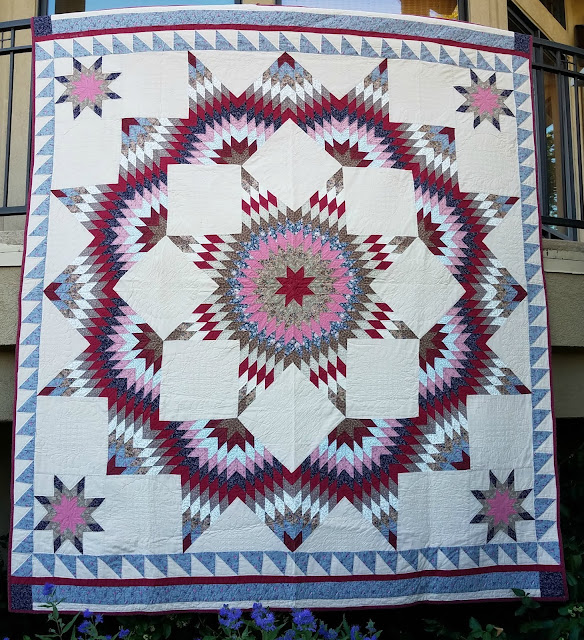 Every quilt has a story.
Is it finally time for me to add a new chapter?