Taking on another Quilter's beautiful
Flower Garden blocks has been a
lovely way to start the new year.
If you remember, I bought these
blocks at my Quilt Therapy silent auction
in November and throughout the holiday
I have been enjoying slowly piecing them together.
There ended up being 97 individual blocks.
I have sewn them into long panels
and are now sewing very long
zigzag seams. 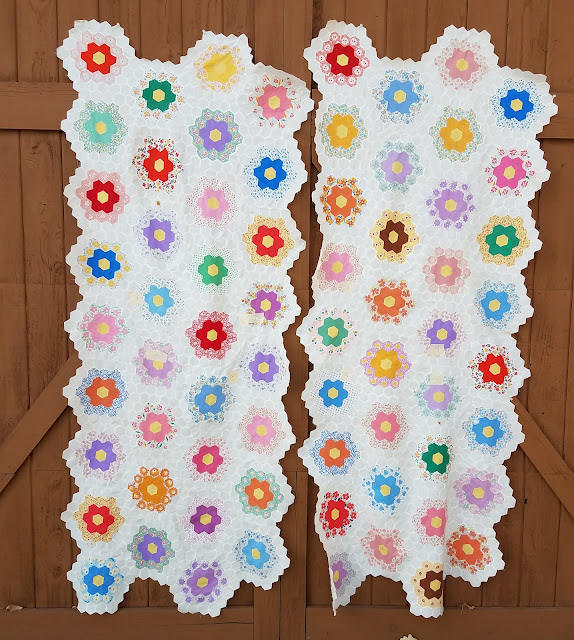 All the while,
I have been trying to figure out,
why the blocks were sewn both by machine
and by hand.
Were they sewn by two people or
if not,
what was the Quilter thinking and what was the plan.
Well, I  figured out
she was a very efficient and systematic person.
She had come up with a plan
where she could save time and still
stitch perfect blocks.
Because she was not using an EPP method
she could vary her method of sewing.
Here's what she did.
After cutting out all her hexies,
and there are no pencil marks to indicate
she drew around a template,
she began sewing them together with a
1/8" seams allowance.
Remember she did all
that fussy cutting .
A very talented quilter.
Step 1. 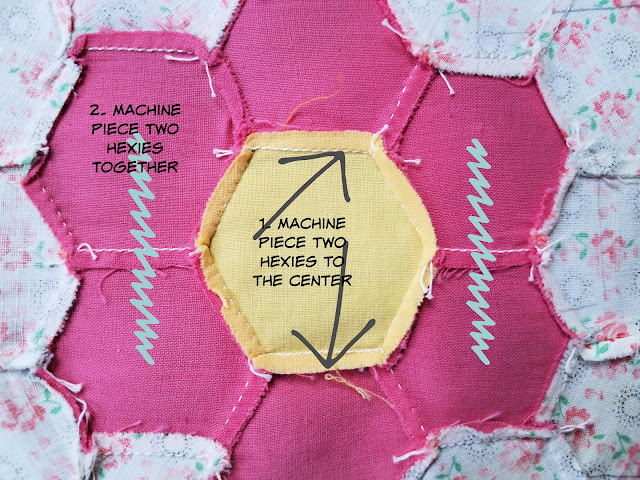 Then after machine piecing part of the first ring,
she sewed the two hexies on the sides
to complete the ring by hand. 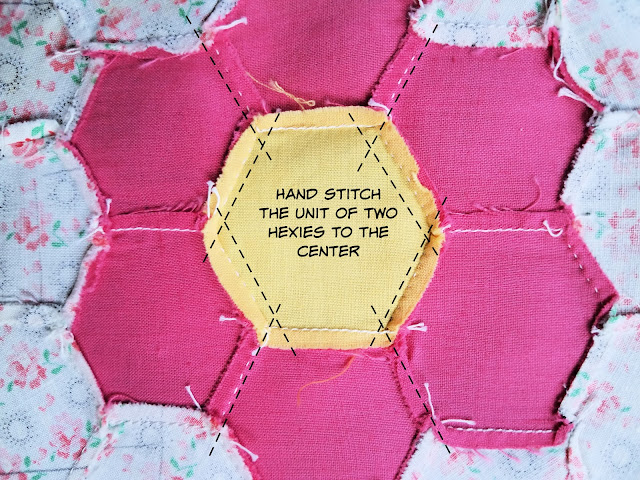 This clever Quilter found herself
half the time at her machine and
the other half sitting and hand stitching.
Now look what she did for the next ring. 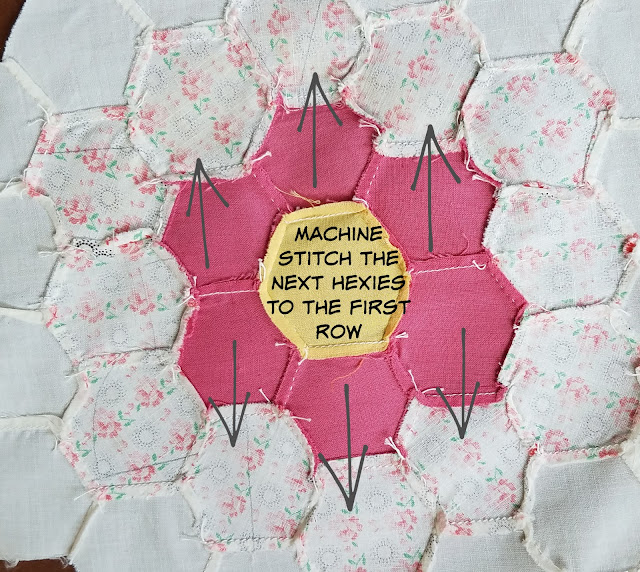 These next hexies would be floppy.
By leaving the seams allowances free
and because she used an 1/8" seam,
she could easily insert and connect
other sections of a ring. 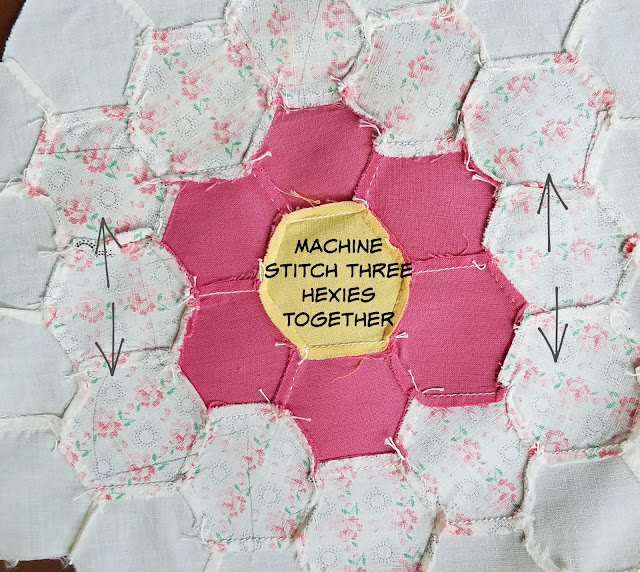 Do you see a pattern?
A bit of zigzag zag stitching. 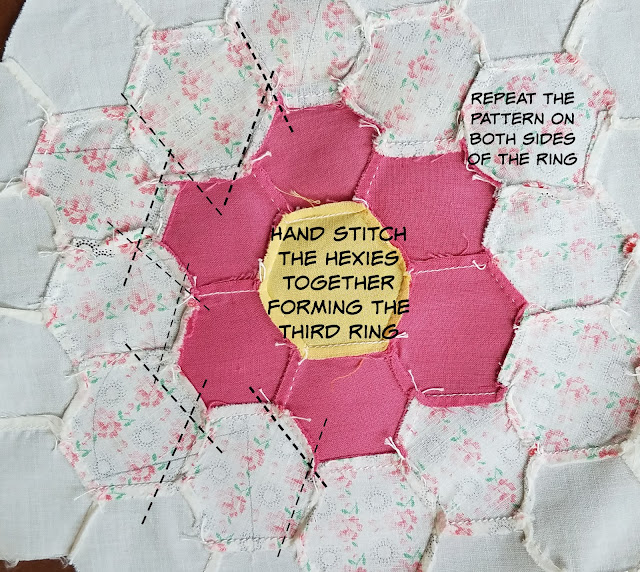 She could work on multiple blocks at a time
sewing a bunch at the machine
and then finishing the rings later.
Here's the third ring.
Sew individual plain hexies to
the second ring,
sew 4 plain hexies together in a row, and
then attach these to both sides. 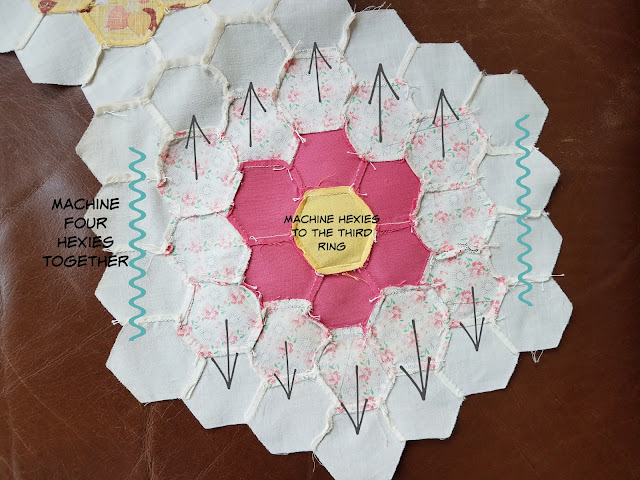 There's a completed block.
She could work on a bunch
of these at a time.
Her combination of methods seemed a
very efficient use of her time and skills.
But that's where she stopped.
I couldn’t think of a combo
method to sew the blocks together.
Could that have been part of the
reason she put all these beautiful blocks away?
Whatever the reason, I feel very
fortunate to have been the next part of the plan.
So, slowly,
I've been zigzaging these together. ❤ 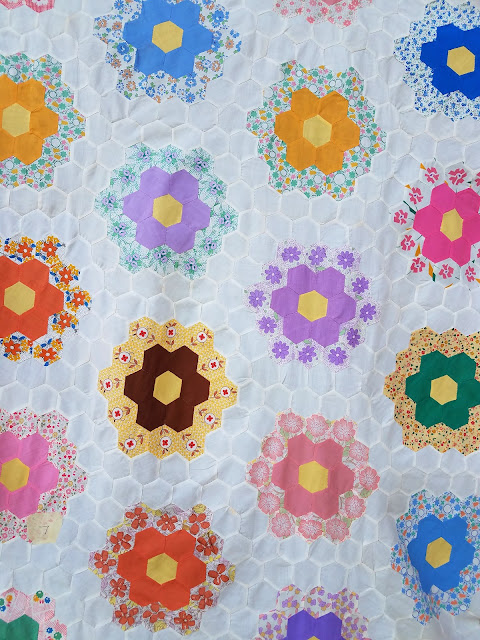